A success factor for the Basel Area has been its steady transformation. From chemicals through the pharmaceutical industry to the broadly diversified life sciences cluster. Now we are witnessing the start of another change: in the direction of digital health, healthtech and personalized medicine. 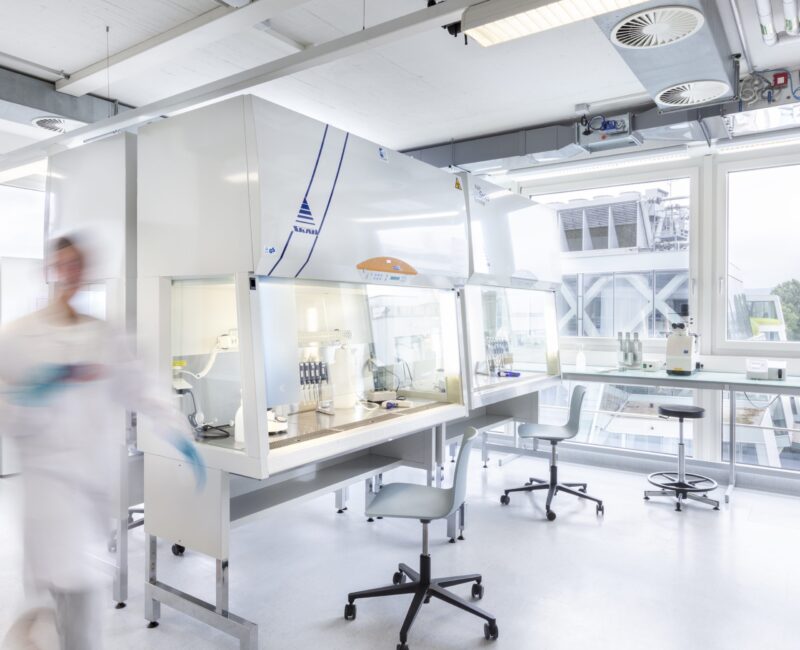 What is Basel? Of course, it boasts the three-countries corner, the Rhine harbour, swimming in the Rhine, Switzerland’s cultural capital and the oldest university in Switzerland – this characterizes Basel as a fun-loving and liberal-minded city. But Basel is also above all the centre of the Basel Area, the economic region comprising the cantons Basel-Stadt, Baselland and Jura. The Basel Area is shaped by a life sciences cluster that is without parallel anywhere in the world.

Nowhere is the density of successful life sciences companies greater than it is in the Basel Area. Led by the two global companies Novartis and Roche, whose headquarters and research centres are both in Basel, this outstandingly endowed ecosystem is also enriched by companies such as Lonza, Johnson & Johnson, Bayer, Boehringer Ingelheim, Idorsia, Syngenta and Straumann. In addition, the University of Basel, the University of Applied Sciences and Arts of Northwestern Switzerland and the University Hospital of Basel each play a key role as partners in research and industry. Thanks to them, there are numerous public-private partnerships here, such as the Institute of Molecular and Clinical Ophthalmology Basel and the Botnar Research Centre for Child Health.

Life sciences companies generate by far the biggest share of value added in the Basel Area and thus contribute significantly to the prosperity of the region and of Switzerland. This is provided mainly by the big established companies, but new companies are also gaining a foothold. The Basel Area is attracting more and more young, promising companies. Robert Sum, Head of Innovation Projects with the regional promotion agency of Baselland says, for example “the Basel region has become a hotspot for innovative startups. A great many startups founded from the universities of Switzerland and from the bordering region in France and Germany, particularly in biotech, medtech, digital health, healthtech and personalized medicine have settled here.”

In fact, the Basel Area is in the process of reinventing itself once again as a business hub. That was already the case in the 1990s, when the chemical industry was still the leading sector. Then the merger of Ciba-Geigy and Sandoz to form Novartis led to a parting of the way for the chemical and pharmaceutical sectors. This led to the rapid growth of the life sciences industry in the Basel Area. While around 14,000 people were employed in life sciences in 1995, the number of people working in this sector today stands at around 32,000.

Small, agile biotech companies have become increasingly important for research and development over the past 15 years. The Basel Area has established itself as an innovation hotspot, with strong universities and an attractive environment for startups and growth. Novartis and Roche continue to shape the location, but in the meantime there are also more than 700 active and successful life sciences companies here. For example, not only have big international companies such as Johnson & Johnson, Hengrui and Moderna opened branches here. There has also been a sharp increase especially in the proportion of companies seeking to offer healthcare innovations – Holmusk, Zifo and Noul are examples of companies engaged in the promising areas of personalized medicine, healthtech and digital health.

A glance at the latest Swiss Venture Capital Report shows that it can be worthwhile starting up a life sciences company in the Basel Area: in 2020, startups based in Basel raised 540.4 million francs, of which 530 million was invested in biotech companies, which represents the best value among the cantons. There have also been some spectacular acquisitions by foreign companies: the Allschwil pharmaceutical company Actelion was sold to Johnson & Johnson in 2017 for 30 billion dollars. The Actelion founders immediately invested the money in the establishment of the biopharmaceutical company Idorsia. And in 2013 the Basel-based biopharmaceutical company Okairos was sold to GlaxoSmithKline for 250 million dollars, in 2019 the Basel biotech firm Therachon went to Pfizer for 810 million dollars and in 2020 the Basel biotech firm NBE Therapeutics was sold to Boehringer Ingelheim for 1.2 billion dollars.

The example of NBE Therapeutics in particular shows that  it has paid off for the Basel Area to invest in suitable infrastructure for startups. The Technology Park Basel, where NBE Therapeutics is based, and the Switzerland Innovation Park Basel Area, for example, provide work environments that foster innovation along with modern laboratories. In 2022, the Switzerland Innovation Park Basel Area will move into a new building by Herzog & de Meuron at its headquarters in Allschwil and, together with the tenants already known, Basilea and the University of Basel Department of Biomedical Engineering, will help to inject life into the innovation campus. Further public and private real estate projects will add to the infrastructure offered.

Creating closeness between researchers and startups

Diverse sponsorship programmes for startups are playing an ever more important role in the Basel Area. One extremely successful example is the accelerator and incubator BaseLaunch. Since 2018, venture capital funds from Europe and the US have invested more than 190 million francs in nine biotech startups supported by BaseLaunch. In addition, the DayOne Accelerator, which is dedicated to the fields of digital health and healthtech, and the biotech incubator Hemex have played a significant role in getting a lot of startups spun out from universities all over Switzerland to set up business in the Basel Area.

The DayOne Accelerator has moved its offices to the most recent site of the Switzerland Innovation Park Basel Area, on the Novartis Campus. Here a closeness is being created between the startups and researchers from Novartis, making new forms of exchange, collaboration and innovation possible. The concept is clearly working, because all places in the innovation park were occupied within just four months of opening in the summer of 2020. So the Basel Area is well-positioned and can look to the future with optimism. This is confirmed by the large number of startups that have been founded in in the region over the past few years, as well as the numerous international companies that have settled here. As Martin Stricker, co-head of the regional promotion agency of Basel-Stadt, puts it: “The Basel Area is well on course to establish itself as Switzerland’s business and innovation hub of the future.”

(Original in German published on 10.4.21 in the NZZ publishing supplement “Zukunft Gesundheit”)